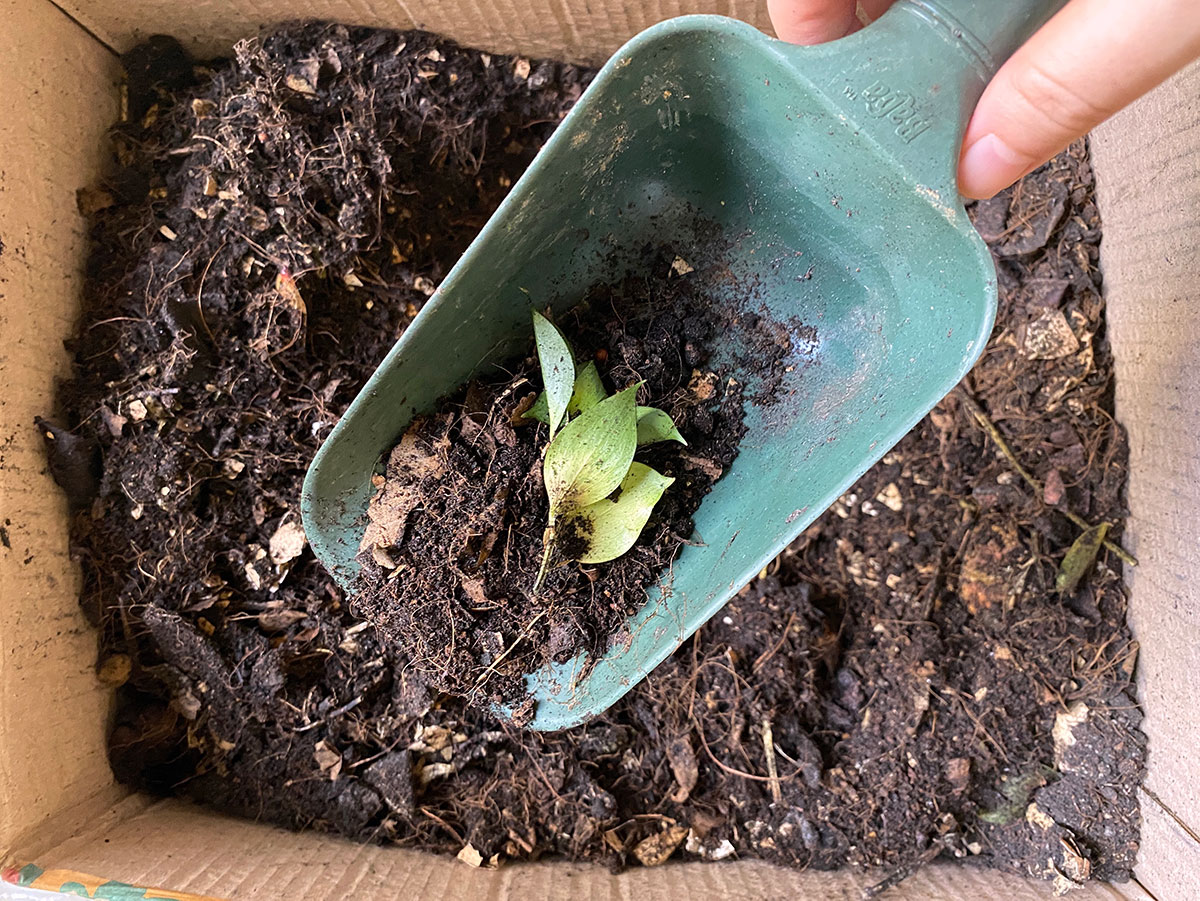 How I started composting in my apartment

In the laundry room of my apartment, there is a very unremarkable cardboard box. I keep it covered in an old t-shirt.

It’s not something that I show to visitors, and I don’t see it for most of the day. But over the last few months, this hidden box has become one of the things I like most about my home.

My compost box doesn’t smell, doesn’t create any liquid mess, and doesn’t require a family of worms to move in.

Instead, it quietly “digests” the daily scraps from my kitchen – fruit and vegetable peelings, coffee grounds and eggshells – and turns them into fresh, nutrient-rich soil.

I had always assumed that composting indoors would be difficult. I pictured a cloud of fruit flies, and puddles of pungent, fermented water. So it was a gamechanger when I came across a New York Times article by climate reporter Hiroko Tabuchi, who explained her simple composting technique.

The compost box method – widely used in Japan, but less well known in the US – is perfect for urban homes without gardens.

Here’s how to do it

Take a cardboard box and prop it up on something, such as a couple of bricks, to let air circulate underneath it. It’s important that the box is cardboard, because this allows for more airflow. Reinforce the bottom with extra cardboard.

Then add a base of approximately three parts coco peat and two parts rice husk ash (or alternatively hardwood ash). Together, this mixture will help absorb excess moisture and odors. You should be able to find these supplies at a nursery or online store.

That’s it. Your compost box is now ready to take on your kitchen waste. Dig a small hole with a trowel, add your scraps, and cover them with the peat and ash mix. Just avoid adding oily or salty food, raw meat or dairy. Hiroko Tabuchi’s Google Doc guide has more details what can and can’t go into the box.

Composting is a small but achievable step to making our homes less wasteful. When we add kitchen waste to our regular trash, it ends up in landfill. The rotting organic waste then creates methane emissions that contribute to global warming.

With composting, we can return this waste back to the earth, following nature’s own cycle. Oxygen, warmth and microorganisms create a process of aerobic decomposition. Over time, the scraps become a nutritious soil.

If it seems like your compost mix is too dry, you can sprinkle a little bit of water into the box to help it along. Now and again, you might spot some fuzzy white mould – this is likely nothing to worry about. Simply turn the soil to cover it again.

After a while, you’ll see your box contents look more textured and uneven as various things break down. Thick orange rinds could take up to a few months to shrink, while thinner peelings will disappear in three or four weeks. As long as you have enough room to keep everything covered, you’ll be fine.

Because I use my compost box every day, there’s always something in the process of decomposing. From time to time, I’ll dig around and find places where the mix looks finer and darker, like soil. Every few weeks, I scoop up a little to use as fertiliser for my houseplants. The new soil builds up very slowly, so the box doesn’t ever fill to the brim.

If you have an outdoor garden or balcony in a warm climate, you can try using flower pots instead of a box. This was a tip I learned from Eats, Shoots and Roots, an urban garden social enterprise based in Kuala Lumpur, Malaysia.

Take seven pots, and add some light soil to each of them. Then put your kitchen waste in one, and cover it completely with soil. Repeat until the pot is full, then move onto a new pot. By the time they’re all full, the first pot’s waste will have broken down and you can start the rotation again. Just make sure the waste is completely buried in soil, to deter pests and wild animals.

In cold weather, composting slows down. But there are still ways to keep your compost going. You can insulate your pots by covering them with a tarp or cover, or by using a container with a lid. Chop your food scraps into smaller pieces to help speed up the process.

While my compost box isn’t pretty or Instagrammable, it brings me joy. I love seeing scraps of old fruit and vegetables shrink and disappear, almost magically, into fresh, soft earth. Turning the soil has become a daily ritual which I find both soothing and satisfying.

Until I have a garden of my own, the box is here to stay. 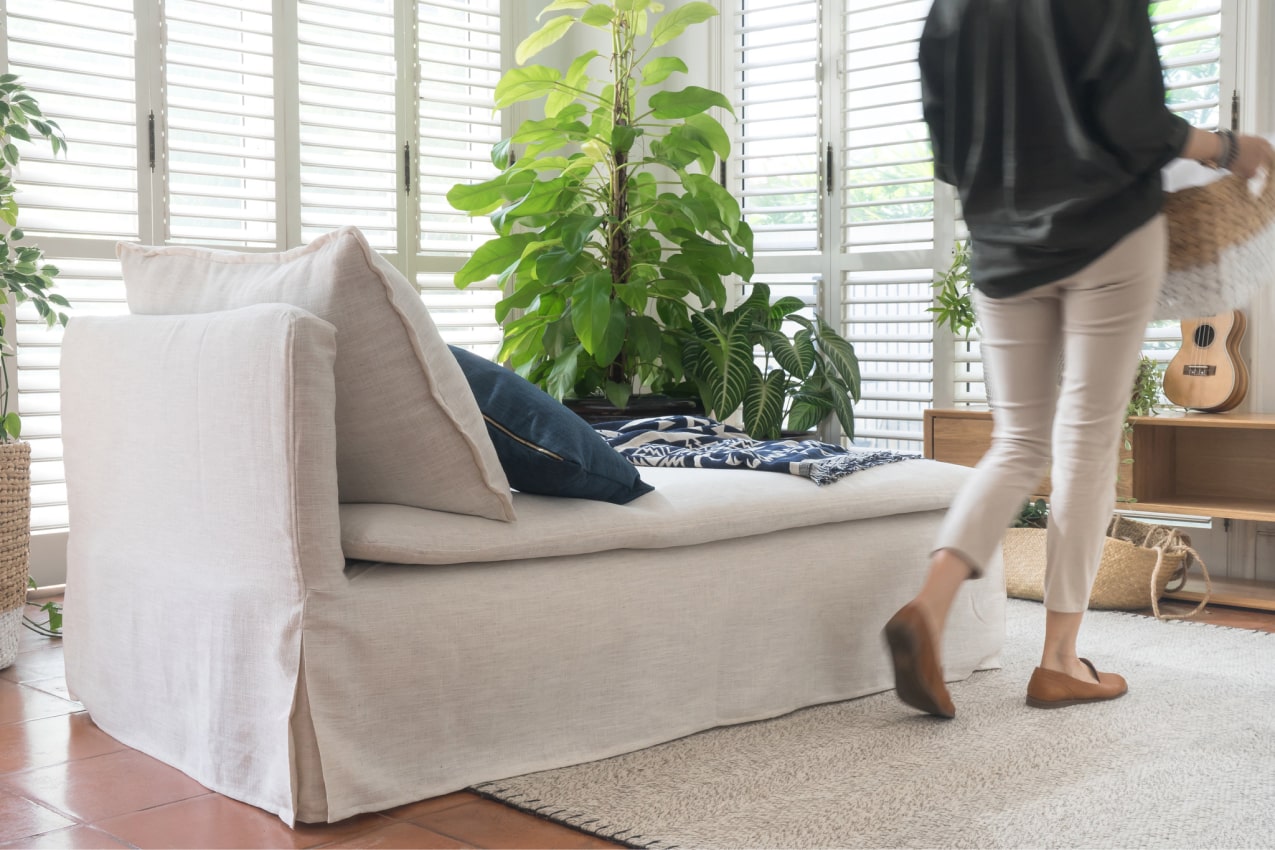 Everything we’re doing to make your sofa more sustainable