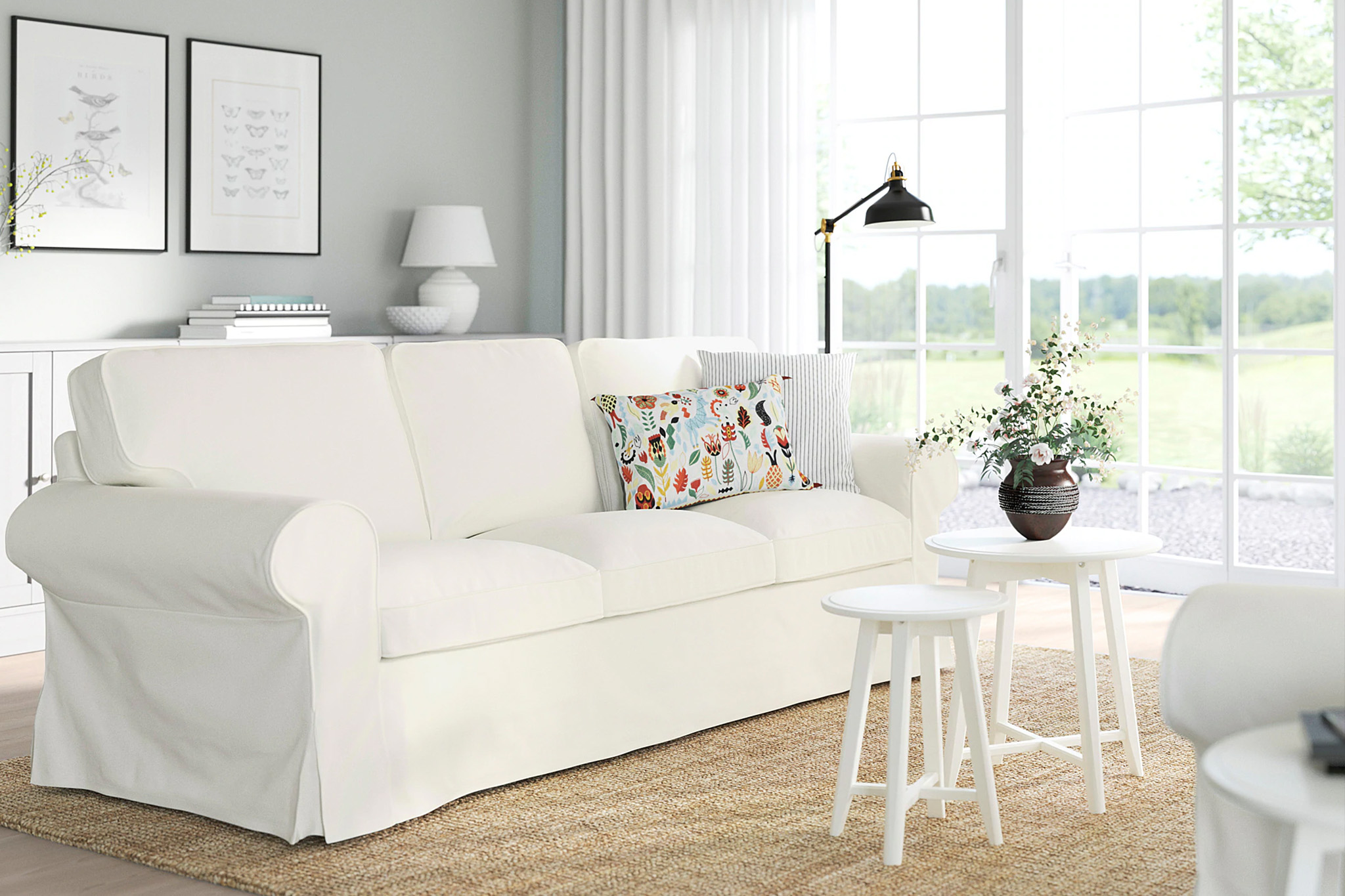 It’s the end of an age for IKEA. At least that’s how it felt like when they discontinued their most popular couch, the Ektorp.

Having been a catalog constant for over a decade, IKEA fans across the US and Canada (where the Ektorp was discontinued) were caught unprepared by it’s sudden departure.

And they didn’t take it well – replacement covers for the Ektorp were fought over like toilet paper in a pandemic.

Alas good things don’t last forever, but hopefully whatever takes their place is a step in the right direction. That’s why all eyes are now glued to the new IKEA Uppland sofa.

As the successor of the most popular sofa in the world, the Uppland certainly has some big shoes to fill. Everyone is waiting to see how it stacks up, which is what I’m hoping to answer today!

To no one’s surprise, the Uppland is similar to the Ektorp. IKEA obviously wanted to fill the void left by the Ektorp as much as possible.

They even went so far as to release the exact same configurations for the Uppland:

Without reading the labels, nobody would guess this was a new couch. It has the same silhouette and colours that the Ektorp came in.

What is surprising however is that the dimensions on the Uppland are a far cry from the Ektorp (by IKEA standards). It’s clear that this rehash isn’t the same as when they discontinued the Vimle and released the Finnala with a half an inch increase to the backrest and armrests height…

No, this time they’ve made real, noticeable changes. The otherwise “safe” design of the Ektorp has been remodeled into a significantly higher and deeper couch, with longer armrests.

Without the back cushions, the back of the Uppland is 2 inches higher than its predecessor and a whopping 5 inches higher with them. That’s not to mention the 4 inches of added seating depth that drastically changes the way the couch feels to sit on.

Like all of their other regional-specific overhauls, I assume all these “upgrades” were made to accommodate their western audience better.

So how comfortable is the Uppland after these sweeping changes? It’s very comfortable indeed! But some may not appreciate the fact they can no longer touch the ground while fully rested on the back cushions.

Say what you will about not messing with things that aren’t broken, but the Uppland is a big improvement over the Ektorp comfort-wise. Chances are, you’ll love it too.

Like it’s predecessor, the Uppland is a very classic round arm sofa. This time, the added seating depth makes it far more loungy.

While the Ektorp had a rather attentive sit, the Uppland is far more relaxed – perfect for those lazy Netflix nights. Still, it’s not too loungy by any means since 23” of seating depth isn’t extreme by couch standards.

Even paired with its increased height off the ground, you’ll still be able to touch the floor comfortably if you’re above 5’7”. Perhaps how high it sits is one reason why the Uppland feels incredibly easy to spring up off.

Or maybe it’s the fact that the seat cushions have springs in them now (which is big news for IKEA couches)… or maybe it’s because the cushions are way overstuffed, which adds even more height.

Whatever it is, this couch is really easy to get on and off from, which is a godsend for anyone with bad knees.

Somehow despite how plump the seat cushions are, the Uppland is not the most cloud-like either. It’s supportive and will let you sink a little into it, but is surprisingly firm-ish compared to its appearance.

The Ektorp which wasn’t the most squishy couch to begin with, so the Uppland is even more comfortable – both to sleep on and sit on. I’d say it gets a solid 9/10 on the scale of IKEA comfort.

The aesthetic of the Uppland is rather unexciting. Classic and good looking, yes; but not exciting.

What’s there to say? It’s the same as the Ektorp – a traditional round arm couch.

Even the slipcover colour choices are the same as the ones we’re used to with the Ektorp minus the “Lingbo Multicolor” option (anyone remember that?)

Personally, I’m a big fan of the fact there are a whole 7 colour choices. That’s way more than what you get with other IKEA couches!

It could do with a wider selection of bold colours though.

Given the colours and shape, the Uppland looks like it would work wonders in more grown-up homes or those going for the farmhouse/cottage look (especially in white) but maybe that’s just me?

The Uppland is as budget-friendly as its predecessor despite the fact it now includes spring support in the cushions.

There weren’t many complaints about the Ektorp cushions losing shape, but the addition of springs will eliminate these completely. And if that wasn’t enough, the Uppland also comes with IKEA’s 10-year guarantee for the frame and cushions.

Not likely you’ll need to use it in the first place, seeing as the frame is essentially one solid thick piece, unlike something like the Soderhamn. Basically it gives a good impression it’ll hold up to normal, non couch-trampoline usage.

Another unique feature of the Uppland is that the seat cushions are easier than ever to get into their covers. There’s a long zipper that completely opens up at the bottom of the cover for easy slipping in.

Having stuffed lots of IKEA couch cushions into their respective slipcovers, I can appreciate this genius! It makes things so easy. On the reverse side, you cannot flip the seat cushions like you could do with the Ektorp.

With all that, even a 10/10 score for this category wouldn’t be too much of a stretch!

It was daring to reinvent the wheel on their tried and tested Ektorp but you can tell that IKEA put serious thought into these changes. They want to make this America’s next top round arm couch.

It’s especially telling that they’ve taken the Uppland further in the direction (seating wise) of the famous Pottery Barn basic round arm couch, but much more affordable.

With such a juicy offering, it’s hard to justify the value of buying a round arm couch from more upmarket brands. Especially when there’s so few reasons not to like the Uppland.

And if you’re one of those still hung up on the Ektorp, the good news is that IKEA hasn’t completely abandoned you – they still sell the three seater Ektorp in Lofallet Beige.

Be sure to head into one of IKEA’s showrooms and compare them for yourself!

Thinking of getting an Uppland but want something more than the standard IKEA slipcover choices? Consider designing your own custom cover! From colour to material to style, you choose it all to best fit your home. You can even order the Uppland without the cover and use your own. How awesome is that?

Interested? Visit us on our website to check out all the colors and fabrics you can get your IKEA Uppland sofa in: 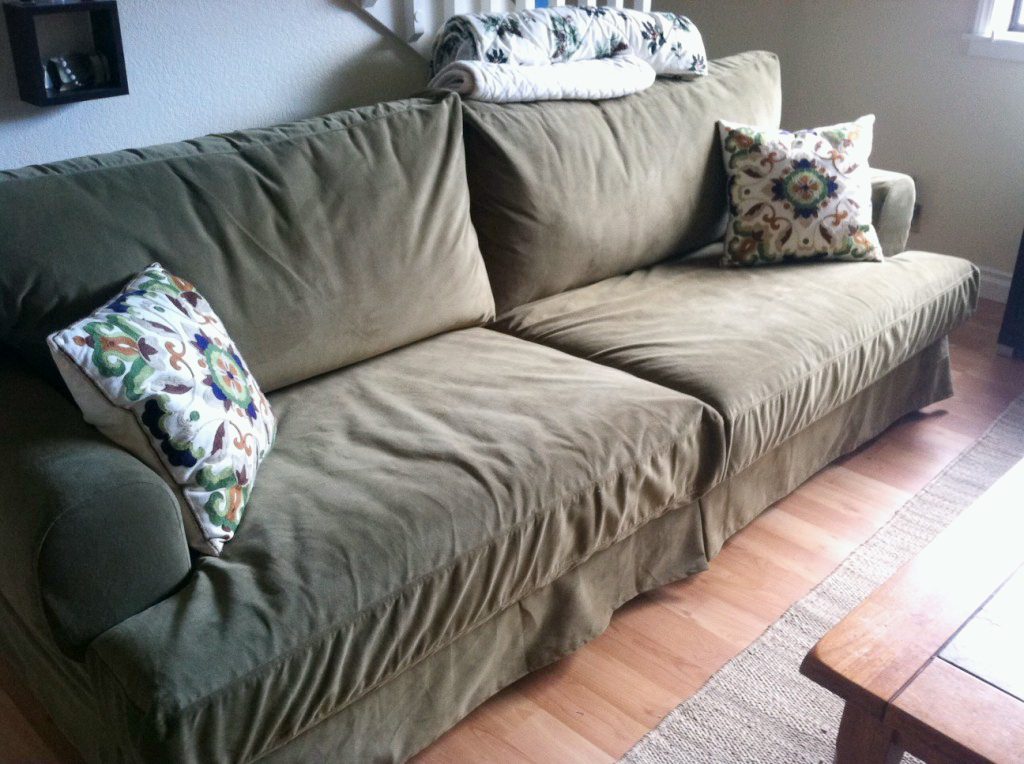 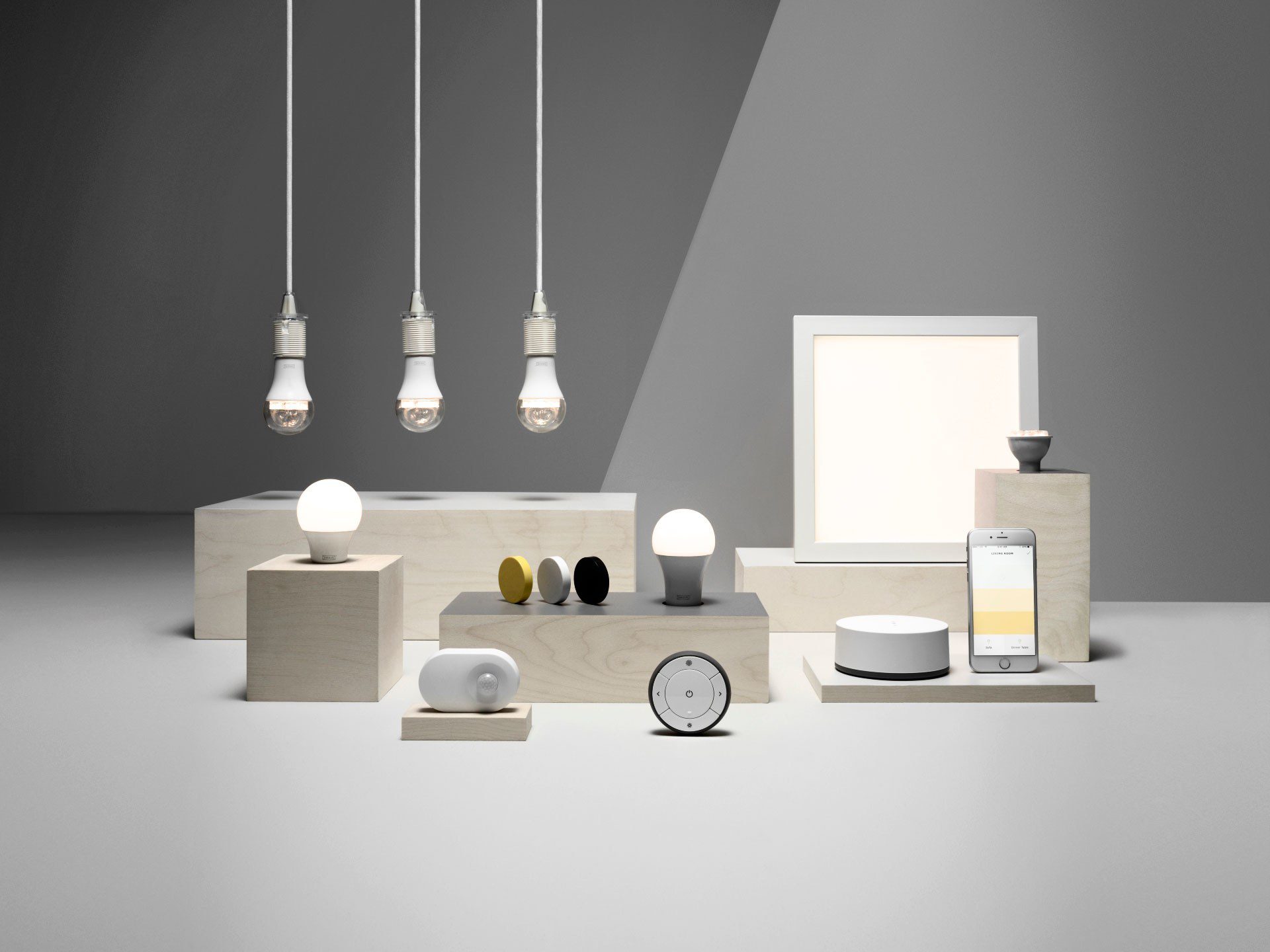 These Smart IKEA Essentials Will Save You Time And Your Sanity